Happy New Year readers (reader?)! Those of us who had the luxury of time off from work have officially been back to the grind for three days, halfway there! I was actually kind of excited this year to get back to work (read: back into my routine), it’s always fun to see the kids after Christmas and hear all about their holiday. This year I had a fun holiday of my own to tell them about…California! Robert and I had an amazing and very full trip. We successfully navigated two brand new cities, plus the airline giving away our seats, an extremely long rental car line, possible food poisoning, and driving in LA, but more on all that (and lots of fun photos!) later. No photos of the food poisoning part, promise.

I left you last with a breakfast casserole recipe a few days before Christmas. I hope everyone’s holiday was as nice as mine, full of family, friends and food (not necessarily in that order). But really, aren’t those three F’s the best thing about every holiday? Sleep and traveling are close seconds. Renly got a brand new haircut for Christmas. Check him out!

This is much shorter than we normally keep him cut but I have to admit it’s kind of growing on me. He’s pretty adorable with any haircut. When we got home late Friday night I thought his little tail was going to wag right off, but for the first time ever I think Robert and I were both more excited to see him than he was to see us, and that’s really saying something. Having a dog is literally the best.

For as long as I can remember, I have been eating the traditional New Year’s Day meal on January 1st. What, you may ask, is this traditional meal I speak of? I’m pretty sure it’s widespread considering both my mother and Robert’s mother do it but it could just be a southern thing. On New Year’s Day you are supposed to eat certain things for luck in the year ahead; pork for prosperity, greens for wealth, black-eyed peas for luck and cornbread for…something….maybe just a delicious starch? My mother-in-law always makes cornbread muffins and hides a penny in one, whoever finds it gets EXTRA luck that year. It’s a fun tradition but if you adopt it, don’t forget to wash your penny thoroughly and warn your guests so that no one cracks a tooth!

Since Robert and I didn’t return from California until the 2nd, we missed our traditional family meal

While lamenting this fact on the flight home as we ate airport food, I remembered I had a Boston Butt in the freezer and decided to make Robert and I a mini version of this beloved tradition when we got home. I didn’t have any cornbread ingredients or black-eyed peas, but pork and spinach I could definitely handle on short notice (hello crock pot!). My sweet mother-in-law is NOT a cook, but the few dishes she has in her arsenal are tried, true and delicious….they are also top-secret as she refuses to share them with me for fear that she then won’t have anything to make or bring to family functions. Someday I’ll wear her down

. On New Year’s she always serves her spinach casserole which is sinfully cheesy and delicious. I say sinfully because I’m pretty sure it’s also terrible for you. Like a whole stick of butter, three eggs, a container of full fat cottage cheese AND a whole block of cheddar terrible. Mmmm, why does bad usually taste so good? 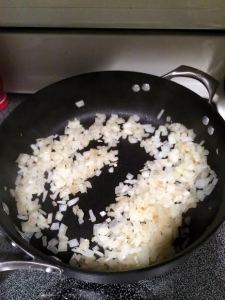 I love having her spinach casserole as a treat, but since I enjoy healthy cooking (and I don’t have her recipe), I decided we would go a different route this year. I created this yummy and MUCH healthier creamed spinach recipe that Robert gobbled right up without ever missing that block of cheddar.