Happy Monday! I had hoped to get this up yesterday but I got busy trying a yummy new appetizer recipe to take over to a friend’s house (I’ll share soon!). Then I got busy eating said recipe, stuffing my face with my friends delicious turkey chili, and doing plenty of wine drinking and laughing with the girls while the boys watched football. Somewhere in the midst of all that Robert and I found the time to take Renly to the park where he lifted his leg to potty for the first time ever! Robert literally whooped with joy which in turn got Renly very excited which in turn convinced Robert that Renly knew what he had just done. I’m pretty sure he was just feeding off of Robert’s excitement but it was pretty cute to watch the two of them jumping up and down and having their own personal potty party right there on the path. Talk about a Sunday Funday.

Hope everyone had a fun Halloween! How cute is Renly in his Halloween tie? It had candy corn all over it…precious. We had a blast at my sister in law’s and my cornbread was a hit! Neither Robert or I ate any Halloween candy Friday night (I know, who are we?) but sure enough my sweet tooth kicked in about the time we got home so we treated ourselves to ice cream and a scary movie on our couch. Pretty wild Friday night, huh? Don’t threaten us with a good time!

We woke up Saturday morning to a temperature that had dropped about 40 degrees over night! What! I knew that it was coming, but I think I still shed a tear or two when pulling out my gloves and hat to walk Renly, especially when I remembered that just the day before I walked him in a workout tank! Goodbye Summer, I’ll miss you until we meet again!

Chilly temperatures and midnight ice cream binges definitely called for a recovery breakfast on Saturday. I wanted something warm and hearty while still healthy. Breakfast also needed to have some staying power because Robert’s sister had quite the fun adventure planned for Saturday afternoon: Ziplining!

It was VERY cold, and extremely windy…not the most ideal conditions for being on a swaying platform 75 feet in the air. gulp. Despite the cold and the wind, we all had a great time, and the views were pretty incredible. The tallest platform is actually the highest point on all of Hilton Head Island! If you are ever in the area and into extreme entertainment, I would highly recommend it. If you aren’t into extreme entertainment but are into delicious breakfast, I would highly recommend my Apple Cinnamon Pecan Baked Oatmeal. See what I did there?

I love oatmeal in every sort of weather but there is nothing better than a big  bowl of something warm on a cold morning. Robert grew up eating cream of wheat and is not a traditional oatmeal lover. In the past I have been able to trick him into eating (and loving) oatmeal by baking it. “It’s on a plate not a bowl, that means it’s NOT oatmeal, just try it!”. Sound familiar to any of you with picky children (or husbands)? 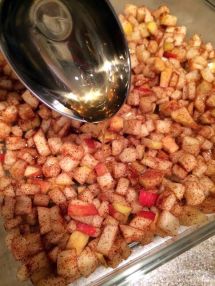 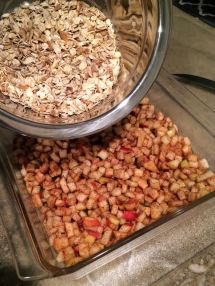 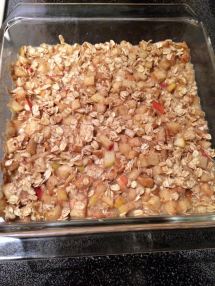 If you have never tried baked oatmeal, you should go and make some immediately. It is so easy and amazing that milk, baking powder and a few eggs can transform what many consider to be a boring breakfast in a bowl to a delightful baked treat. It’s customizable, great for company (or a brunch party!) and re-heats well so you can enjoy your leftovers in a flash all week! This particular baked oatmeal is perfect for this time of year… diced apples, crunchy pecans, aromatic cinnamon, warm oats.… mmm. Even Robert the self proclaimed oatmeal hater said “This is really good, and I don’t even like oatmeal”. So in a nutshell, this recipe will fill you up, turn oatmeal haters into oatmeal enthusiasts, keep you alive while ziplining, AND make your house smell amazing! And cleanup is pretty much non-existent since all you need is a knife and a mixing bowl. Doesn’t get much better than that before noon.

2. Arrange diced apples on bottom of pan. Toss with cinnamon and drizzle with 2 Tbsp. of honey.

4. In the same bowl that oats were just in (or a different one if you like to do a lot of dishes

Have you ever been ziplining? What did you think? What is your favorite fall/winter apple recipe?