The time has come to conclude my recaps of my trip to China. It has been so fun re-living this great trip through these posts and I can’t wait to share more with you!

After a wonderful and busy few days in Beijing, it was time to pack up and head back to Shanghai for a few more days before I said goodbye to Anna. She had booked us passage on the overnight train and I expected it would be similar to the ride there….boy was I wrong. Anna had decided to be thrifty and save us some money by going with the less expensive tickets, this was fine by me and my limited graduate school budget. Once we boarded the train we were both shocked to see just how different the less expensive option was. For some reason I didn’t take any photos during this train ride, I don’t know if that was because it was late when we boarded and I wasn’t thinking or if I was just too scared to get my camera out, but I’ll do my best to describe it. The train car was essentially one large open car, no private rooms or seats like the last one. In fact there were no seats at all, just rows and rows of triple bunk beds. Yes, I said TRIPLE. Anna and I both got the luxury of the top bunk, which was not only extremely narrow but shook and swayed constantly with the motion of the train. Not the best sleep I’ve ever had as you can imagine. Here is a photo of an actual Chinese “hard sleeper” I found online, this is EXACTLY what our train looked like.

The train was also filled mostly with men, many of whom were sitting around in various states of undress playing cards or reading. There was one bathroom for everyone to use, and lo and behold it had a squat toilet. Squat toilets are hard enough to use when stationary, imagine attempting to use one on a very jerky train. You should be able to imagine the state of the bathroom based on that information. Bleh. Since it was late when we boarded, Anna and I both stowed our suitcases and tried to sleep, eager to wake up back in Shanghai. 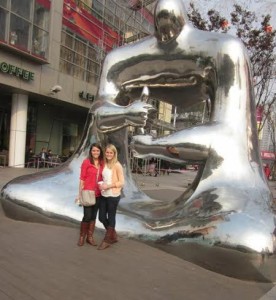 We survived the train ride and were excited to try out a new hostel during our second stay in Shanghai. Our new hostel was more expensive than our previous one on Pet Shop street, and felt like we were in a hotel. After making ourselves at home and catching a quick nap we woke up hungry and ready for another night out. Anna knew of an ex-pat bar that served half price hamburgers and we headed that way to meet a few of her friends. I’m not usually a burger lover but by this point in the trip I was more than ready for more familiar food. The burgers were good and were accompanied by live music from a Taiwanese band who specialized in American pop music. Solid. 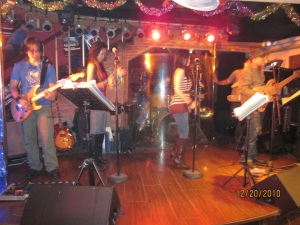 We met two British men at the bar who looked very similar (both rather short and balding), were quite intoxicated and who took it upon themselves to hop up on stage and provide backup vocals for the band. Highly entertaining. 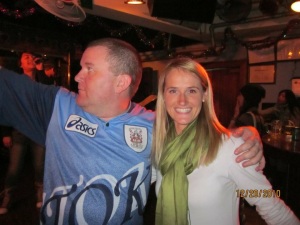 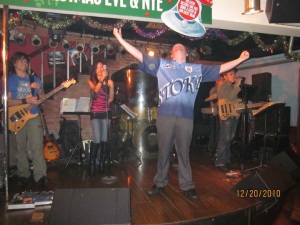 Of course the night wouldn’t have been complete without a trip back to BaBa (Number 88) where I happened to find more of my favorite “not quite correct but at least they tried hard” signs in English.

The next morning we met up with Anna’s friend Vincent who to this day is one of the most flamboyant and colorful characters I’ve ever met.  If you’ve ever seen Kevin Lee on Bravo, this is EXACTLY what Vincent was like. Fabulous Vincent insisted on treating us to lunch at a very fancy establishment….Pizza Hut. Now lest you think I’m being snotty, I’ll have you know that Pizza Hut is very different and IS actually fancy in China. The food is relatively the same, but the prices are high by Chinese standards and the restaurants have chic decor and a maître d rather than plastic booths and employees in logo visors. One more weird reason to love China. 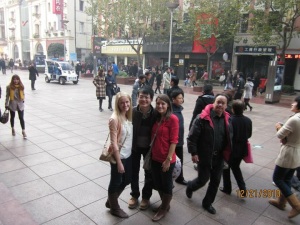 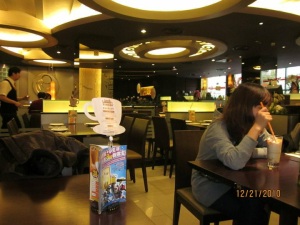 Vincent ordered for the table, which was customary since he was treating, and after much deliberation he chose the “Delicious Meat and Poultry” pizza, which he was sure we would love. I think it tasted about as good as it sounds. 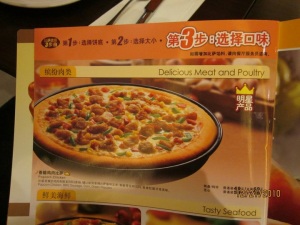 After lunch Anna and I bid farewell to Vincent and headed off to tour the Barbie Museum. I’m not sure if the museum is there any longer which is really a shame. I’m not a Barbie fanatic by any stretch of the imagination, but the museum was really modern and visually stunning. The center of the building had a large spiral staircase that wound up it’s four stories and was surrounded by a glass wall of Barbies in hot pink outfits. Each doll and outfit was unique. There were also tons of interactive activities (e.g. design your own Barbie dress) and all sorts of dolls on display. Classic Barbies, Barbies modeled after celebrities or famous designers, Barbies from every time period and culture, it really was interesting, even if you aren’t into dolls. 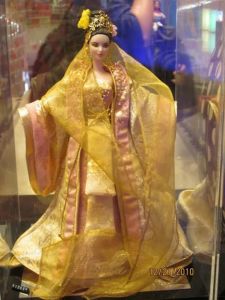 The next day was my last in Shanghai. The weather was pleasant so we spent the day doing a bit of last minute shopping, grabbing lunch and walking around the Bund for the last time.

After lots of big hugs, a tearful goodbye at the airport and a lifesaving upgrade to business class, I was on my way back to the states! China was certainly not my first choice for a culinary destination, but it was an amazing adventure and one that I would gladly experience again! My brilliant niece and nephew are both in a Chinese immersion program at their elementary school where 80% of their day is taught in Mandarin. Fingers crossed they will take a field trip to China one day that will require their favorite aunt to chaperone

Hope you’ve enjoyed these recaps as much as I’ve enjoyed writing them. Til next time!