If you missed the beginning of our California trip, catch up HERE! Our second day in Los Angeles began much better than its predecessor (thank goodness!). Robert woke up feeling 100% better and both of us were starving after no dinner and an early bedtime the night before. A quick Yelp search landed us a few miles down the road at Jacks and Joe in downtown LA. I loved the cute name (you know how I feel about pancakes) and we hit them just before the breakfast rush and were immediately seated at the end of a long communal high top that snaked through the center of the restaurant.

The menu was full of delicious sounding pancake combinations with adorable names, my best/worst nightmare.

Although I consider banana pancakes to be manna from heaven, I had seen a yelp photo of the most delicious looking breakfast burrito I’d ever laid eyes on and couldn’t get it out of my head. I was bummed out and confused not to see it listed on their menu, so I asked the waiter about it. Apparently California has a thing with “secret menus”…I’m looking at you In N Out…and Jacks and Joe was no exception. I don’t really understand this whole secret menu phenomenon, but it makes me both excited and nervous all at the same time.

The server explained to me that regulars sometimes ordered said breakfast burrito (and or loaded hash browns) since the kitchen had all the ingredients on hand, even though it wasn’t on the menu. I got the impression that the kitchen staff found the secret menu orders kind of annoying and he didn’t really want me to order it (maybe because I was clearly not a local and only a sneaky yelper) but you guys…that photo…I had to have it! 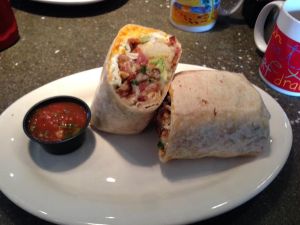 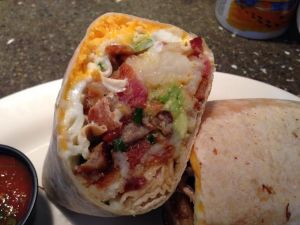 I can’t even remember what Robert ordered (probably french toast) because I was way too into my burrito. It had Portuguese sausage in it which was absolutely divine, chorizo, bacon, hash browns, cheese, big chunks of avocado and an OVER EASY EGG! This basically made the burrito have it’s own delicious sauce that ran out all over it when you took a bite. So. Good. It was also the size of my head which made lunch unnecessary.

After breakfast we checked out of our hotel and made our way to The Grove and the Original LA Farmers Market. I love a good farmers market and was dying to check this one out. We walked through The Grove first, which was still decorated for Christmas!

The Grove is more or less an outdoor shopping area, pretty to walk through with statues and fountains, but the stores are mostly chains and not terribly exciting.

The Farmers Market which is located right next door, was much more my speed. When I think “Farmers Market,” I think rows of tables and stands selling vegetables, homemade breads and pastas, jams/jellies and salsa, some prepared foods and a few creative booths that may sell art or something crafty. The LA farmers market did have some fruits and veg stands, but it was dominated by prepared foods, and not just your typical wares. It reminded me of a carnival! There were several ice cream stands, a doughnut spot!, french fries and sandwiches, kebabs and some flatbread pizza concoctions that looked interesting. 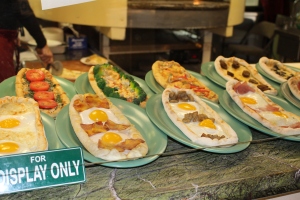 All the yummy looking food made me wish I wasn’t so full from my breakfast burrito, but in the end it was probably for the best as it would have been impossible to choose from all the available options.

After getting our fill of the farmers market, we hopped back in the car and drove through Beverly Hills before making our way to Santa Monica and then Malibu, getting on Highway 1 and beginning our road-trip up the coast!

The start of our drive was BEAUTIFUL and I began to appreciate what a gorgeous state California truly is. I wouldn’t really appreciate this fact fully until we got to Big Sur and lovely Carmel By the Sea the following day, but Malibu was beautiful in it’s own right. The ocean was to our left and stunning mountains to the right, we don’t have both those things in the same place back in the south, so I was in heaven! It was like being in both my homes (the mountains of Tennessee and the beaches of South Carolina) at the same time. 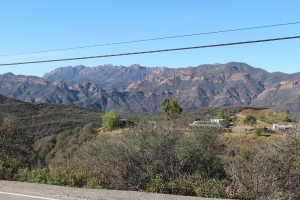 Good pictures were hard to capture from the car, but we did stop for a few photo ops before it got too dark.

When it got too dark for anymore good photos and our stomachs started to rumble, we made our way back to a more populated highway and stopped for dinner. Robert is a burger lover through and through and while I could really take or leave a cheeseburger, I had been relaying the In N Out hype to him since we first started planning. 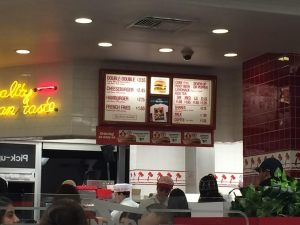 Thanks to Google I was more prepared for this secret menu than I had been for Jacks and Joe. Robert  went with a traditional cheeseburger and fries while I got mine animal style with a protein burger (lettuce bun).

Sadly, I wasn’t impressed. I can probably attribute this to the lettuce bun, but even Robert didn’t think his burger was anything too special. The fries were also horrendous which I later read was typical of all In N Outs. Boo. Maybe we just hit a bad location? or maybe my expectations were just too high. Maybe an In N Out lover out there can explain the obsession all Californians seem to have with this not so delicious fast food join?

After our disappointing dinner we were thrilled to make it to our hotel in Carmel around 11:00 and promptly went to bed, anticipating the following day at Pebble Beach!