We arrived in San Francisco around 8:00 after a full day at Pebble Beach. Once again we were reminded how vast California is and how unique her major cities truly are. San Francisco felt more like New York than it did beachy Los Angeles, earthy Big Sur or ritzy Carmel. So many different types of people and places, all in the same HUGE state!

Of all the cities we had visited so far, San Francisco was the one I was most looking forward to with all of its historic sights and plethora of famous tourist destinations. We checked into the Hilton on Union Square which proved to be a great central location for touring the city by foot as we planned to do. The room was fantastic and Robert was thrilled to be done with boutique hotels. Perhaps someday he will try another one when he doesn’t have food poisoning and develop a better outlook…. poor guy. The view from our balcony was beautiful and definitely made me feel like a country mouse in the big city!

Since it was already late, we hit the streets in search of dinner, armed only with the yelp app on our dying cell phones. In hindsight, it probably would have been smart to ask someone at the hotel for a recommendation, but I think most of the food options around Union Square are fast, tourist driven and not the best San Francisco has to offer. After a fruitless search for Clam Chowder and walking in circles for a while we finally ended up at Lefty O’Doul’s.

Part kooky pub, part Hofbrau, Lefty’s was a true experience! I always thought a Hofbrau was a German restaurant/bar, but as I was soon informed by the Lefty’s staff, it is actually a specific type of restaurant that was developed in Northern California… not even Germany! A Hofbrau offers cafeteria style food service and although the name comes from traditional German breweries that served food in their beer gardens, the ones in the US don’t even usually serve German food, focusing instead on carved meats and sides. Robert and I both got corned beef sandwiches and a cup of their famous chili. Not the best of either that I’ve ever had, but it was decent and plenty to fill our bellies before bed. 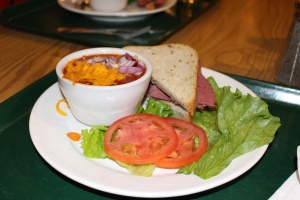 The next morning we woke bright and early, ready to hit the streets for a full day of exploring by foot. The view from our room was equally as stunning by day as it had been by night.

Our first stop was the Westin St. Francis on Union Square. We had heard that their glass elevators offered a fantastic view of the city for free! The lobby was still decorated for Christmas so we stopped for a few photos. 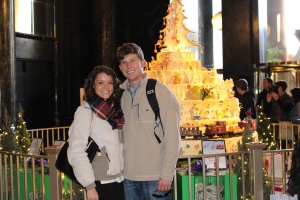 Unfortunately, they have recently installed a security feature on the elevators and you must have a room key to ride. We hopped on anyway with a group of people staying at the hotel but only managed to catch a quick glimpse from the top floor and no pictures

We had too much to see to be sad for too long so off we went again in search of Lombard street. 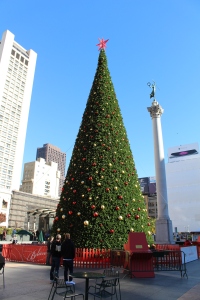 I should note that this was when we first discovered just how hilly the streets of San Francisco truly are….holy slopes! I loved this as it made every day feel like a workout, word to the wise…wear comfortable shoes as you trek up and down through this city!

We finally made it to Lombard Street, the crookedest street in the world! I was excited about seeing Lombard Street since my California dwelling Uncle Derek had gifted me with an aerial picture of it as a child. I used to love to trace the hairpin curves with my finger and always displayed the picture proudly on my bookshelf. My uncle passed away in September, before our trip, so it was nice to finally see the street I had always associated with him. 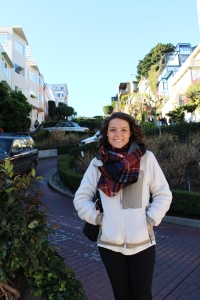 Lombard street is a must see (or must drive on) if you are in San Francisco, but it is quite difficult to get a decent picture of it….I did my best! 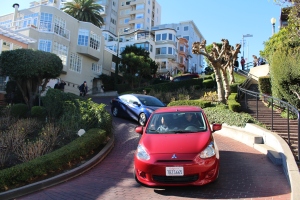 From Lombard Street we headed to Fisherman’s Wharf and stopped at the famous Buena Vista Café along the way. The Buena Vista is credited with introducing Irish Coffee to the US back in the 50’s. If you’ve never enjoyed an Irish Coffee, it’s a yummy blend of coffee, Irish whiskey, cream and sugar and is a great after dinner cocktail when it is cold out. The little café is right on a corner and doesn’t look like it has changed much since the 50’s. It isn’t much to look at, but is constantly packed with tourists (or locals) vying for a seat at the bar that runs the length of the restaurant. I enjoy an Irish Coffee and since it was chilly it was definitely a must do for us. 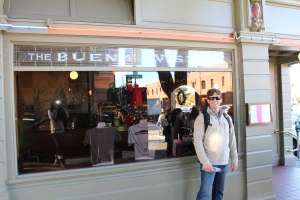 Even if you hate coffee (or alcohol), you have to at least pop your head into the place to watch the bartender at work. He makes around 20 coffee’s at a time, assembly line style and you will be amazed by his speed and accuracy. If I attempted this feat I would have a floor full of coffee and whiskey probably about 5 half full glasses. Better not quit my day job.

After finishing our drinks we reluctantly gave up our warm seats in the Buena Vista and headed out to explore Fisherman’s Wharf. 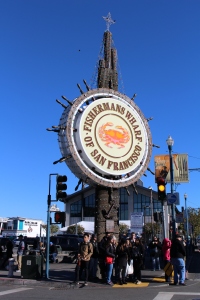 There were lots of people, and lots of seafood, but we weren’t hungry enough yet to do anything more than browse.

We left Fisherman’s Wharf and headed back into the rolling hills of the city, stopping at a few sights along the way, including Saints Peter and Paul Church, where Marilyn Monroe and Joe Dimaggio took their wedding photos after their civil ceremony. 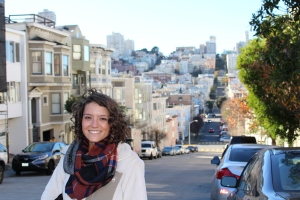 As noon approached, our stomachs steered us in the direction of China Town, where we planned to have lunch. More on that next!