Happy Wednesday! Hope everyone is having a great week. I am still soaking in the bliss of a weekend away…and for once it was near enough that we got back early on Sunday and got the house in order and errands run in record time! Confession: We were both in bed by 8:00 on Sunday night (7:30 for Robert) and it was blissful. Normally if we are out of town for the weekend I am up until midnight trying to get everything unpacked and ready for the week. Amelia Island was the perfect distance (2 hours) from home. Far enough to feel like we are on vacation but close enough that we truly could enjoy the whole weekend without dreading the car ride. Robert and I both agreed that we would definitely be back!

I’m sure you are dying to hear all about it and check out my iphone pictures since we forgot the camera at home…whoops. Or maybe you could really care less but you’re bored at work and would like to see my pictures anyway? Either way, I’ll get right to it 🙂

We arrived around 5 o’clock on Friday and I liked the look of Amelia Island immediately. The marshes were beautiful and the weather was perfect. It reminded me a lot of Hilton Head except less developed and a lot less crowded. Robert decided to be extra splurgy for my 28th and had booked a room at the Ritz Carlton! Neither of us had ever stayed at a Ritz (and based on the price we probably won’t ever again!) BUT I could sure get used to it! They definitely take service to another level. Both of us remarked several times that we felt like we were back on our honeymoon in Riviera Maya. Everyone calls you by name and is so eager to help with anything you may need.

As soon as we checked in I noticed how much the hotel really went out of their way to accommodate children. This surprised me since you don’t normally think of expensive hotels being overly family friendly. We were greeted by a pirate in the lobby (already surrounded by his own pint-sized fan club) and his treasure chests full of candy! So cute! 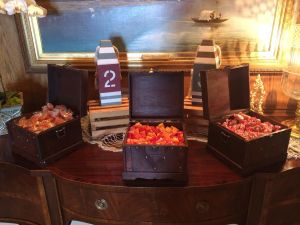 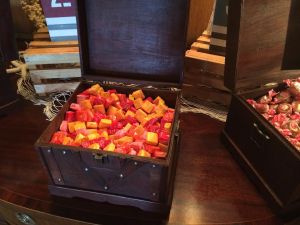 And lest you fear the kids were going to have all the fun, we were quickly offered a pina colada shot by a sweet waitress (who also had Shirley temple shots for the pirate fan club). Our room had a nice view of the ocean and overlooked a seating area outside the lobby. 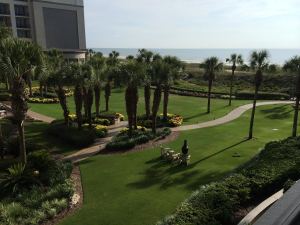 After situating our bags in the room we decided to explore the hotel. The hotel itself is beautiful with woodwork every where you look. They also had a nice gym (and I actually went!), an indoor and an outdoor pool and sweet little nooks with swinging benches.

We grabbed a drink at the pool side bar and walked down the beach access to enjoy them on the sand.

Once we got a feel for the hotel we decided to change clothes and make our way into Fernandina Beach to find dinner. Robert had made us reservations at Salt, the restaurant within the Ritz (and also rated #1 in Amelia!) for the following night, so we wanted something in town and casual. After reading yelp reviews on the way down and getting suggestions from both the concierge and the valet, we had narrowed it down to a few casual seafood options. Unfortunately, our first choice, The Salty Pelican (and the tuna nachos I had been eyeing on the way down) had a long wait 😦 and our second choice looked a little fancier than we were interested in, so we ended up at option 3: the Crab Trap. 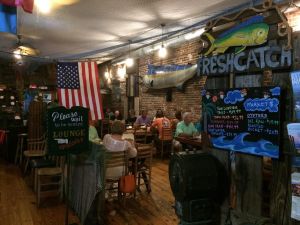 It looked sufficiently beach-y and had battered french fries on the menu which were of great interest to Robert. We both ordered blackened seafood platters.

The seafood was good, the sides weren’t at all and the hushpuppies were just OK. Overall, I’d give it a B- and would suggest you steer clear of battered fries…much better in theory than actual taste. Everything did seem to be homemade, so there’s that 🙂 When we left dinner there was beautiful heat lightening over the water. I am typically terrified of lightening but this lit the sky up pink and purple and really was gorgeous. I tried to take a photograph but capturing lightening is apparently beyond the capabilities of the iPhone 5 camera.

Once we got back to the hotel there was live music in the bar so we enjoyed a nightcap and people watching. There was a group of about 25 shag dancers who were incredible to watch. I wasn’t blessed with the gift of rhythm so I am always impressed by those who have it. Robert and I decided that when we retire (or if we hit the lottery and retire early) we should definitely add dancing lessons and join a shag club to our to-do list. We went to bed full and happy and anticipating a fun, relaxing day on Saturday. More on that next!