Holy hiatus! It’s been a while! In case you were worried we never made it home from Thailand…SURPRISE…we did! I have been dying to jump back on the blog and start re-capping and re-living our trip but true to form, life has been a little hectic. We got home from Thailand at the end of June and immediately began the process of moving into our new home. I mean IMMEDIATELY…got home at 2:30, started moving at 3:00. And let me tell you, moving is the worst, and moving while jet-lagged is the worst of the worst. It was a pretty exhausting few weeks, and as soon as we were done and settled I got very sick and was down for ANOTHER week. Add about a week’s worth of family and company in town once I was well and you see why the blogging fell by the wayside. BUT now I’m back and so excited to share our amazing trip with you! So let’s get right to it shall we?

Thailand was beyond amazing. It exceeded my expectations in every way and has quickly moved into the top spot on my list of favorite destinations. If you ever have the chance to go, TAKE IT, you won’t regret it. I have said many times since returning, each place we visited was so unique that it felt like 4 trips in 1. We got a dose of the big city in Bangkok, cooled off and slowed down in Chiang Mai, enjoyed the laid back, beach bum vibes of Koh Tao and then ended it all in resort like Koh Samui, plus a crazy Full Moon Party!

We touched down in Bangkok at 9:30 pm and taxied to our hotel in the Sukhumvit district. We checked into the Hotel Icon and were greeted with purple cocktails (their signature color) and shown to our room on the top floor right next to the rooftop bar/swimming pool.

We went to sleep as quickly as our jet-lagged bodies were able knowing we would be waking up to a full day of touring.

The next morning we got up bright and early to beat the heat (not possible) and make our way to the first stop on our list, Wat Po a.k.a. Temple of the Reclining Buddha. We stumbled out of our hotel and into an un-metered taxi. Now, before you start thinking I’m a putz who did no research before traveling, think again. I knew un-metered taxis were trouble, but we negotiated the price down to 40 baht before we got in. 40 baht is roughly $1.30, and I felt pretty proud of myself for not falling for the typically taxi scam. Little did I know that cheap taxi was taking us to an expensive private boat dock rather than the much cheaper public boat I was anticipating. Thailand 1, Laurin 0.

The kind taxi driver dropped us at the dock and insisted we take a picture in front of this graffiti tiger/shark/robot before we were quickly scooped up by a tiny Thai woman with sunscreen all over her face.

She hustled us onto a private motor boat for 1600 baht (45 usd) which sped off to give us a 45 minute canal tour before depositing us at the temple. Rip. Off. I consoled my bruised ego with the fact that she had started at 1800 and the realization that we HAD planned to do a canal tour at some point. The motor boat also offered a steady breeze which was such a respite from the stifling heat that it just may have been worth it. 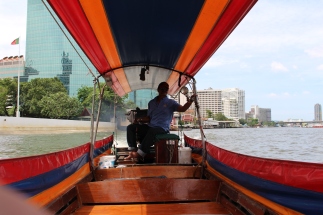 I quickly forgot about the price once I started taking in my surroundings. We cruised through the main canals where we got water views of many of the city’s famous temples and sites, but my favorite part by far was the small waterways that ran behind homes and markets and gave us a true look into Thai life. 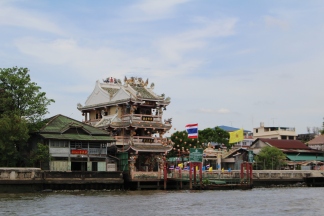 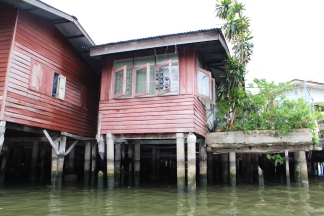 I loved catching glimpses of people hanging laundry, eating breakfast and especially this sweet little boy who ran along the fence of the playground waving at us 🙂 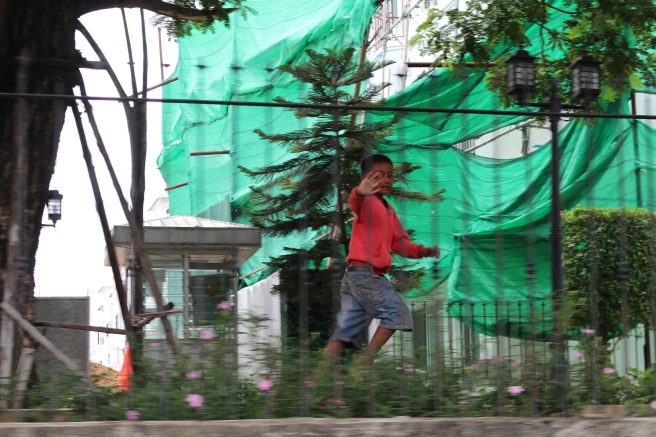 We disembarked at a dock filled with food stalls that led directly to Wat Po. 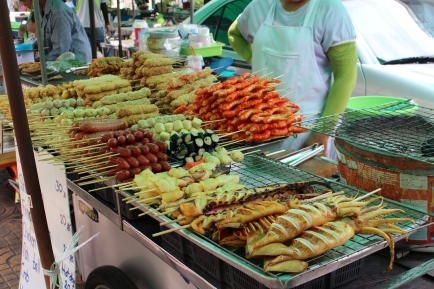 There was no line and a small entrance fee so into the temple we went.

The temple was self guided and began with several open air rooms filled with Buddhas. People stopped to pray, light candles and put small pieces of gold leaf onto the statues as offering. 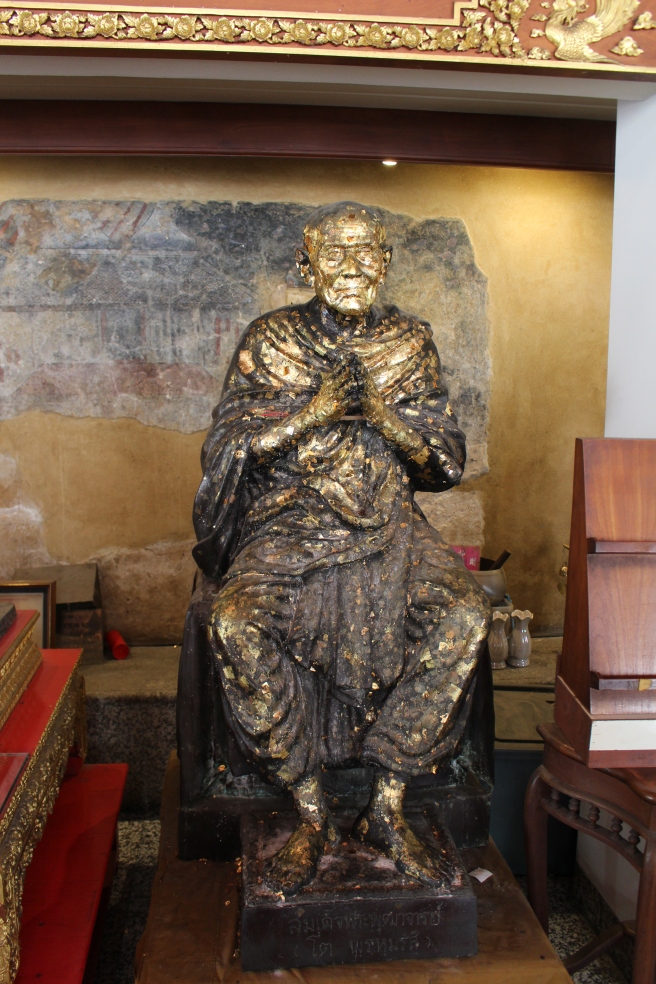 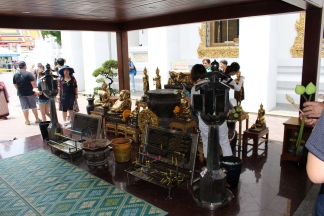 The reclining Buddha was in a separate chapel and was truly something to behold!  15 meters high and 45 meters long it was difficult to get a photo to do it justice.

Beside the Buddha were 108 bronze bowls representing the 108 characters of Buddha. People dropped coins into the bowls as offerings which made constant chiming background music as we walked through the corridor.

Outside we took in more of the ornately decorated architecture before heading down the street to the Grand Palace.

We successfully avoided another scam (I plan to do a whole post on how to NOT get scammed later) and arrived right at the hottest part of the day, perfect. Unlike Wat Po, the lines were long and it was SO crowded! Going first thing in the morning or later in the day is probably your best bet when visiting this popular site.

Despite the crazy crowds and intense heat the Grand Palace was beautiful and well worth the visit.

When the heat became too much to handle we stopped for a cool treat before leaving the complex. Haley grabbed me a pomegranate ice cream pop:

Surprise! What looks like pomegranate arils on that packaging is actually red beans. That’s right, bean ice cream. Far from refreshing but surprisingly not as disgusting as one would think. By the time we found the exit we were starving and stopped into a lunch spot close to Khao San Road for some pad thai. Khao San Road is a popular destination for backpackers and therefore filled with restaurants, bars and plenty of shopping. 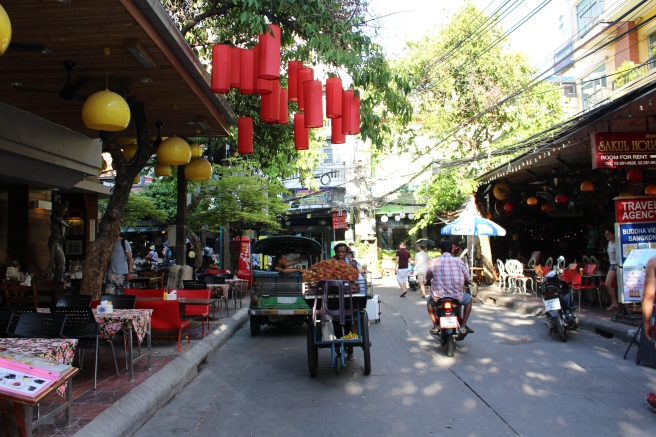 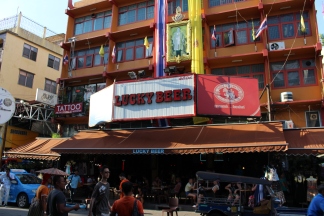 The 5 o’clock traffic was horrendous so we opted for a Tuk Tuk to get back to our hotel. 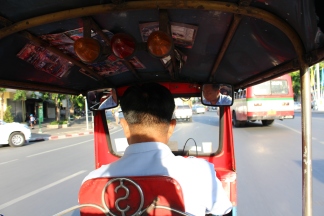 Every mode of transportation in Thailand was somewhat of a bet with your life, especially the brightly colored Tuk Tuks that weave in and out of traffic. The only thing that appeared less safe was the motorcycles that carried entire families (literally 5 people on one including an infant precariously balanced on the drivers knee) and this lady riding side saddle:

Alas, we made it back to the hotel in one piece, ready for day two!