Our first full day in Chiang Mai was spent eating our way through cooking school, so we were more than ready to explore the city on Day 2, and best of all, we would finally have Robert with us! After breakfast I snapped a few photos of our adorable hotel, The Golden Bell, while we waited for Robert to arrive from his early flight from Bangkok. 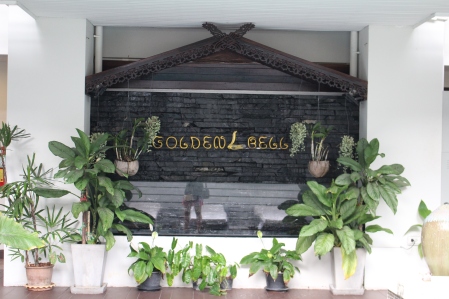 The staff were kind everywhere we stayed but they were exceptionally nice at the Golden Bell! The hotel was very clean, in a great location just outside the city center and they had free bicycles for the guests to use during their stay. 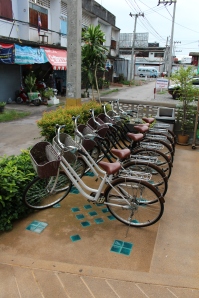 Robert’s taxi finally pulled up around 9 AM and I was simultaneously thrilled to see him and in complete disbelief that he had actually made it to Bangkok and then on to Chiang Mai all on his own. I had researched for months and planned our trip meticulously but was more than a little wary that my darling husband who has barely left the states would be able to travel half way around the world solo.

The man amazes me daily.

We wasted no time and headed straight for the city! It took about .5 seconds for me to observe that Chiang Mai was prettier, friendlier, more laid back and WAY less crowded than Bangkok. It also seemed at least 10 degrees cooler and was extremely easy to navigate…double win!

The city of Chiang Mai is basically a giant square grid surrounded by walls, each of which has a gate. Our hotel was located next to the Chiang Mai Gate so this is where our navigation always began.

Our first stop was at Wat Jet Lin. A small, peaceful little Wat with a few friendly monks that we thought would be a good first taste of Thailand for Robert. He asked lots of questions and was totally in to the whole experience, making me a very proud wife 🙂

We stopped for a quick iced coffee and then made our way to our second (and final) Wat of the day, Wat Chedi Luang.

Chedi Luang was much bigger and more ornate than Jet Lin. The Grand Palace had certainly been breathtaking but I preferred the smaller Wat’s that were full of people in prayer rather than tourists with selfie sticks. 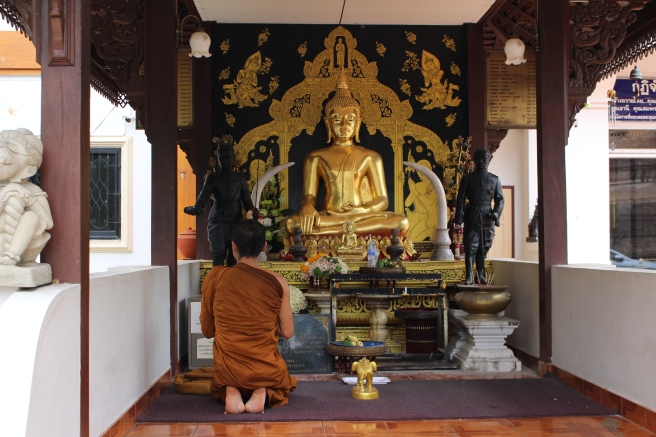 After we left Chedi Luang it was time to seek out some lunch! Haley decided to try a crunchy edible bug from a street vendor on the way.

We stopped at Huen Phen, a traditional northern thai restaurant close to the Wat. Robert and I both ordered Khao Soi, a noodle soup dish famous in Northern Thailand. The food came out fast, tasted delicious and was of course dirt cheap. 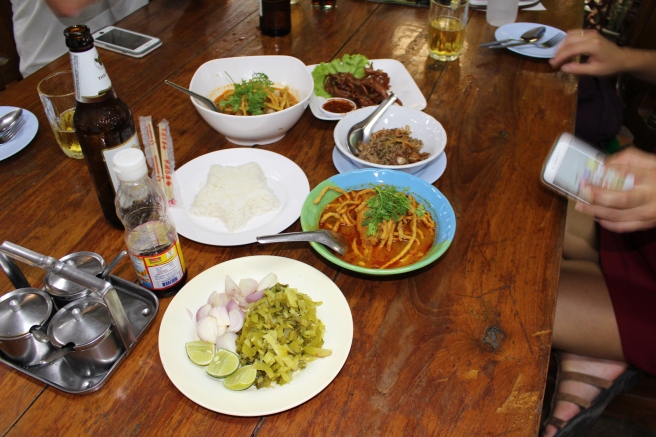 With our bellies full we left Huen Phen and browsed the streets of Chiang Mai in search of a respectable looking massage parlor. Thailand is known for its extremely inexpensive (and in my opinion vigorous to the point of painful) Thai Massage. There are massage parlors on literally every corner and they run the gamut from sketchy backalley shops (happy ending anyone?) to swanky high dollar spas.

We found a place that looked safe enough and offered hour long thai massages for 6 dollars a pop. Certainly can’t beat that price!

We were each given a complimentary foot bath (who wants to massage stinky feet?) and then shown to one of two rooms in the tiny parlor.

The room had three beds, perfect for the three of us, and three changes of clothes, elephant pants and button up shirts for everyone! 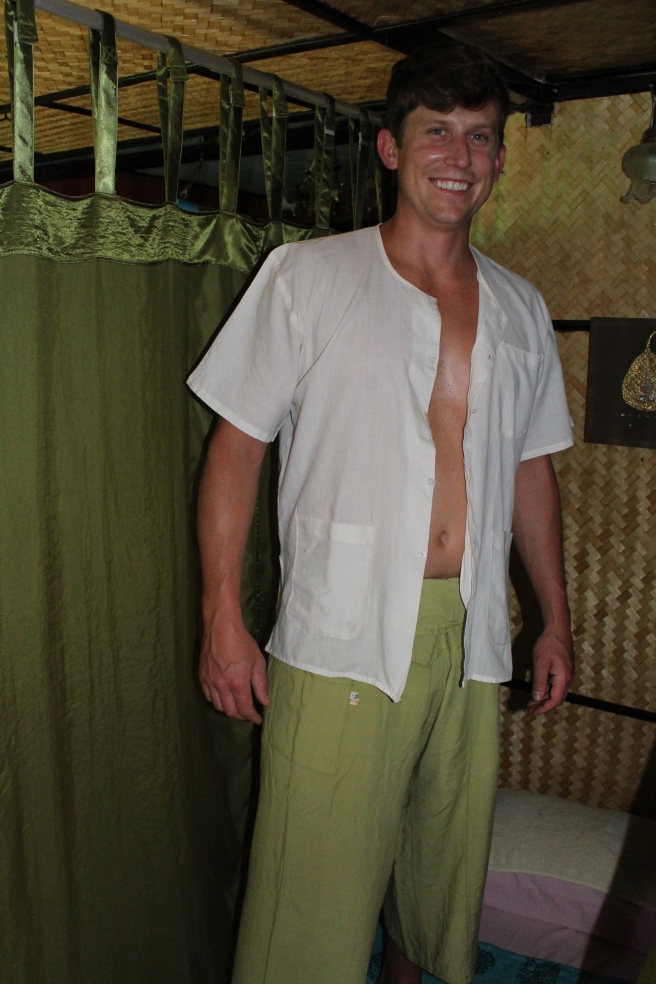 We quickly changed clothes and  enjoyed our massages.

Newsflash in case you are a novice like I clearly was…. Thai massage HURTS! It is not the relaxing spa experience you may be used to. It’s more like a tiny Thai woman using your body as a jungle gym. Robert and Haley were both into it while I spent at least 55 minutes of my hour making “ow that hurts” noises and wishing for it to end. 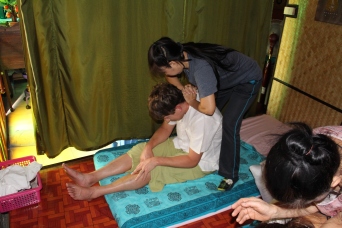 Eventually it did and as painful as I found the experience, I DID feel better afterwards. The owner told Robert to come back tomorrow for a “hot oil massage” (watch it lady…) which was our cue to exit stage left.

We wandered around a bit more after our massage and then made our way back to the hotel to rest up before the night market! Chiang Mai is famous for their night markets and I couldn’t wait to experience it.

We started the night with some street beers (you can do that in Thailand) and a sampling of street food. 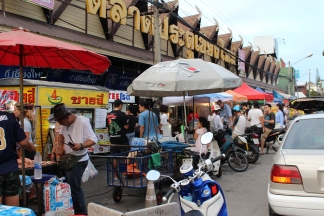 Some travelers are weary of trying street food but if you are smart about your choices (Go for things that are fresh off the grill, don’t eat anything with too many flies around, no peeled fruit, etc) then you really shouldn’t have a problem. 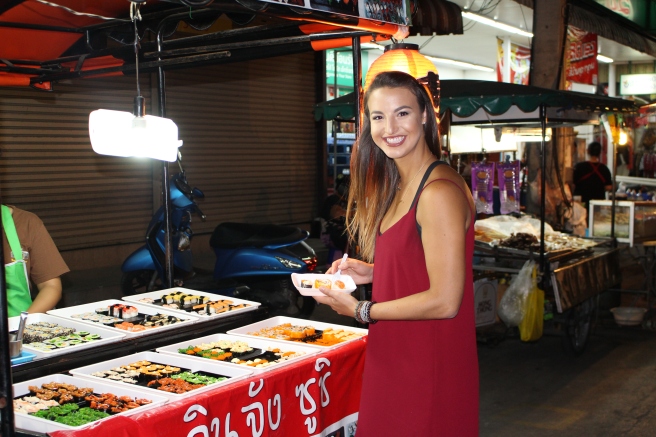 The street food is plentiful, varied, delicious and CHEAP! It’s a great way to sample lots of different dishes for a lot less than you would spend sitting down at a restaurant. 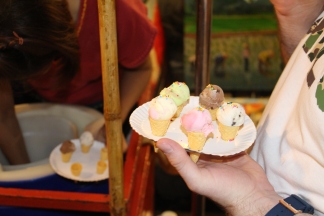 We also perused all the wares while we stuffed our faces and even caught a street concert (talent show? who really knows). 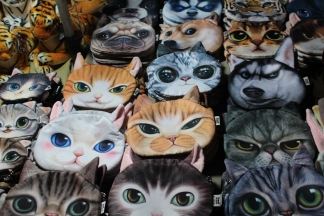 Oh Thailand… the things you sell are weird. Shopped out and full of food it was time to call it a night! We had to be up early the next day for the highlight of our trip… Patara Elephant Farm!