The first leg of our trip consisted of sightseeing in the big city of Bangkok, the second, slowing down in the northern city of Chiang Mai, finally it was time to head south to the islands for a little R and R!

We chose the gulf coast islands since the Phuket side was more likely to have adverse weather (monsoon season) at the time of our visit. Koh Samui, Koh Pha-ngan and Koh Tao are a chain of three popular islands on the gulf side. Koh Samui is the largest, and where the airport is, so that is where we flew into from Chiang Mai. There are cheaper ways to get there, but flying is the fastest and we wanted to maximize our time. Our plan was to first spend a few days on Koh Tao, then head back to Koh Samui for a few more days and Robert would leave from there. Haley and I then planned to spend our last island evening on Koh Pha-ngan and attend one of the infamous Full Moon Parties before heading back to Bangkok to fly home.

* I want to take a moment here to acknowledge how WONDERFUL our experience with Thai airlines was. We flew Bangkok Airways in-country and have nothing but positives to report. It was relatively inexpensive (AirAsia was cheaper but has a dodgier track record), the amenities were amazing (flight lounges with free food and wifi), they fed you on every flight, even a 30 minute one, and the employees were so friendly and professional, a stark contrast to the very rude Delta flight attendant we encountered on our way there.

The Koh Samui airport  resembles a large hut and doesn’t have walls which I found most charming and tropical. Once we had our bags we took a cab to the ferry station and caught one bound for Koh Tao. The ferry ride took about two hours and I won’t lie to you, it was unpleasant. The seas were extremely rough and the captain wasn’t slowing down for anything. The waves were so high they were splashing up over the top of the ferry and water was dripping down from the ceiling! Several people got sick, including the man behind me who vomited at least 5 times throughout the ride. Not. Fun.

The poor pregnant woman on board practically kissed the ground when we finally docked and we weren’t far behind her! After agonizing over trip advisor reviews we had booked a villa at The Monkey Flower resort and had instructions to call the caretaker/driver Mo for free pickup. Mo arrived shortly in his white Tacoma and we were off!

As we drove Mo explained to us that Koh Tao was a fairly small island, best known for it’s great diving and laid back party scene. Most of the hotels, restaurants and dive shops were located along the main road, but the Monkey Flower was HIGH up in the mountains. He gave us a cell phone with his number pre-programmed into it and told us to call him anytime and he would take us anywhere we wanted to go and would additionally set up any activities we wanted to do for us. The twisty turning drive up the mountain was a little stomach churning but when Mo delivered us to the doorstep of our villa, The Bouganvillia, it was totally worth it.

It looked like a cute little mushroom house and I was instantly in love. Robert was less impressed by the fact that only the two bedrooms had AC, the other rooms only fans, but he did admit that the place looked “pretty cool”.

The Bouganvillia was built around huge boulders, several of which were built right into the wall! It also had a private pool and waterfall which offered a fabulous view of the beach below! 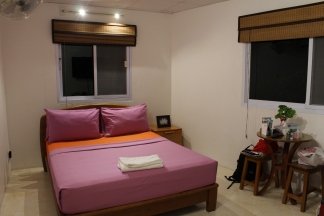 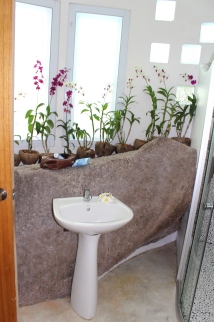 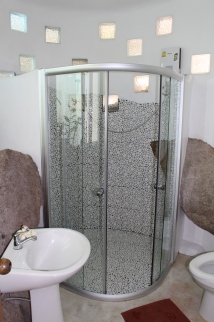 After a long day of travel we decided to hang out by the pool, order dinner in and call it an early night. The next morning we woke up early and called Mo to ask about scheduling a private longtail boat tour around the island (a MUST do!). He told us he knew just the guy and would pick us up shortly. He dropped us off at the beach and introduced us to his friend Pen who had a longtail boat and wanted $40 to drive us around for the entire day… The ENTIRE day… so cheap!! 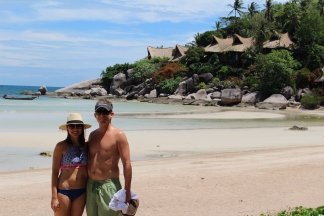 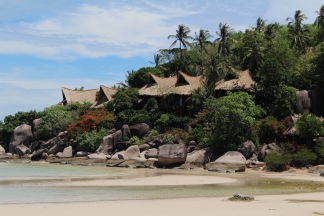 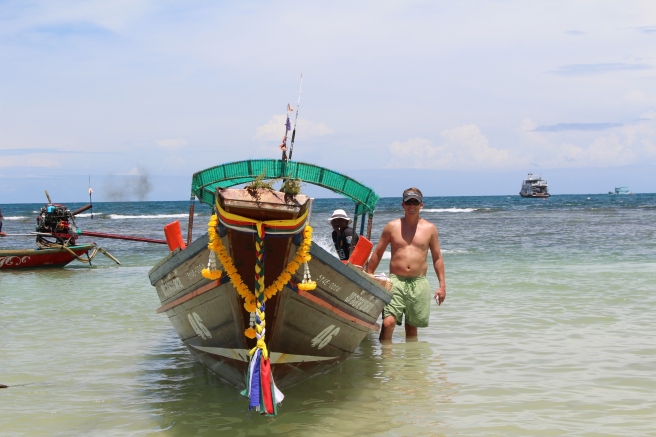 The longtail boats have home made diesel motors with looong propellers which were just about the funniest looking things you’ve ever seen and fascinated Robert to no end.

We rode around the island, enjoying the gorgeous scenery and stopping periodically at coves to snorkel. 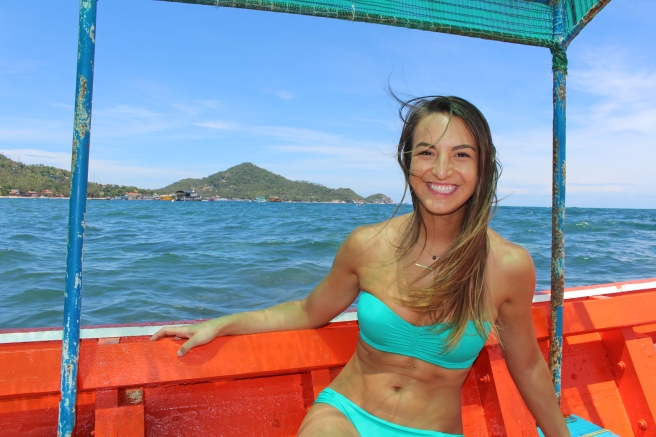 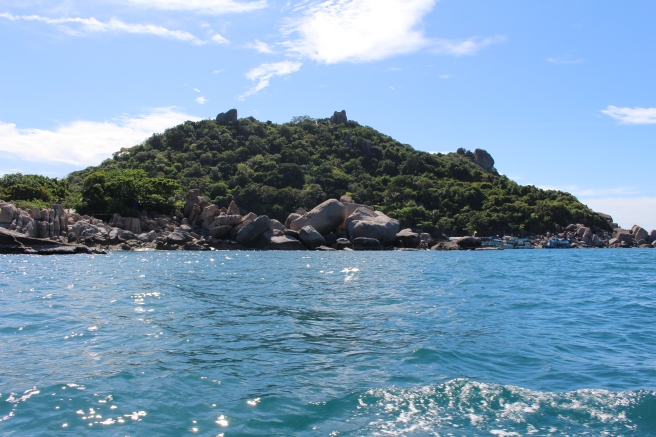 I’m not usually a big snorkeler, the few other times I have gone I always feel it doesn’t live up to my expectations but for the first time, I finally understood the hype (and wished I had an underwater camera!). The coral and rock formations were brightly colored and breathtakingly beautiful and the vibrant fish were amazing. 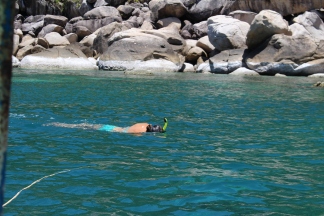 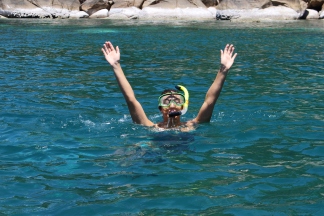 We snorkeled for several hours before deciding it was time to break for lunch. Mo had suggested Mango Bay, one of the coves which he assured us had the best (and cleanest) food. 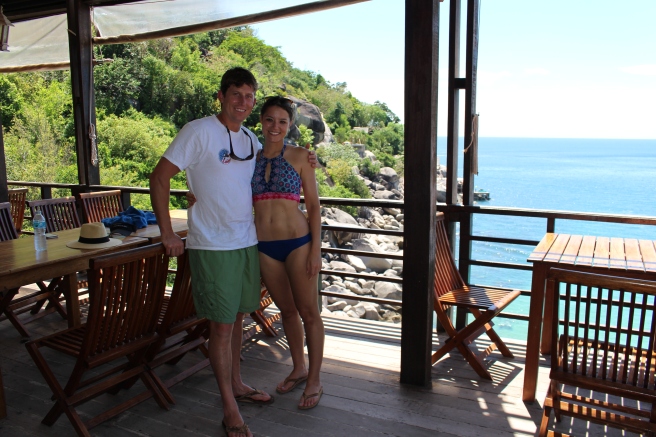 We ordered chicken sandwiches and beers and watched the boats move in and out.

After lunch we asked Pen to take us to Nang Yuan Island. Koh Nang Yuan is actually made up of three very small islands that at low tide, are connected by giant sand bars that serve as beaches you can walk across. At high tide the beaches disappear and they again become three separate islands. 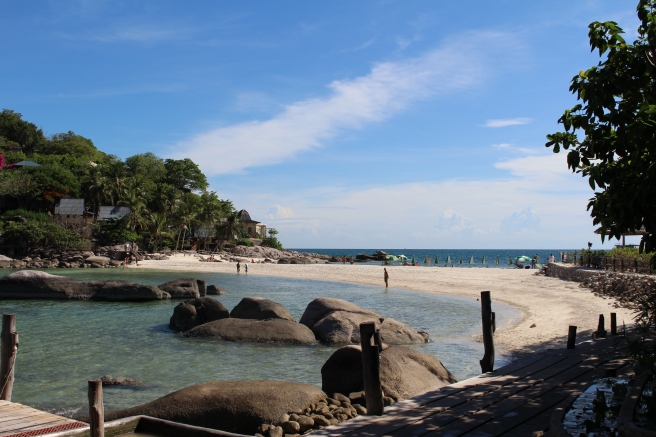 We paid our 100 baht entry fee and headed off he pier to explore. One of the unique features of Koh Nang Yuan is that you can hike to the top of the tallest island for an incredible view which we of course decided to do.

We quickly found that the sandbar “beaches” connecting the islands were made up as much of broken coral as they were sand. Robert almost immediately sliced his toe open on a sharp shell and decided he was going to forgo the climb and lay on the beach instead. Haley and I trucked on without him and made our way to the top. 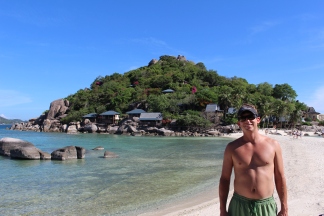 We walked up what seemed like a million narrow stone steps and worn pathways before we found ourselves on a rock ledge looking out over the island! 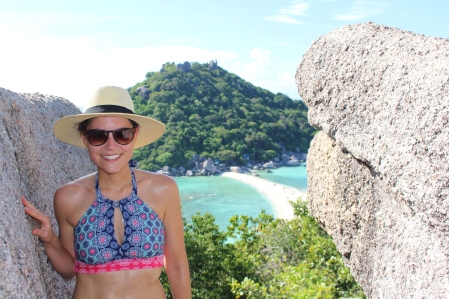 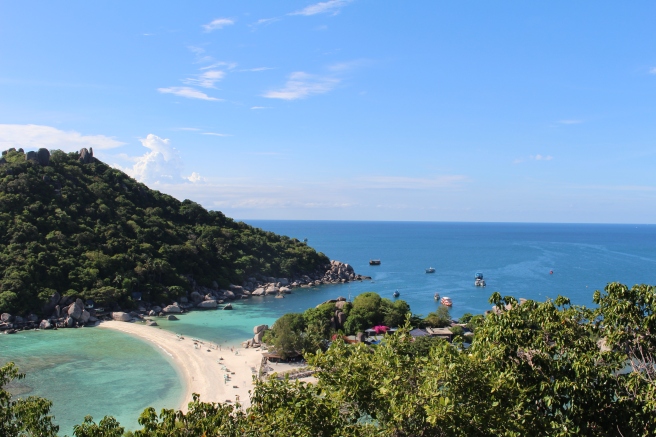 We made our way back down, gathered injured Robert and got back on our boat just as the tide was beginning to rise. Pen took us back to Sairee beach where we walked along the shore and stopped for frozen drinks at a beach bar before calling Mo for pickup. We returned to our villa exhausted but kept our eyes open long enough to order dinner before calling it a night.

We decided to spend our final day on Koh Tao at our villa, relaxing by the pool. 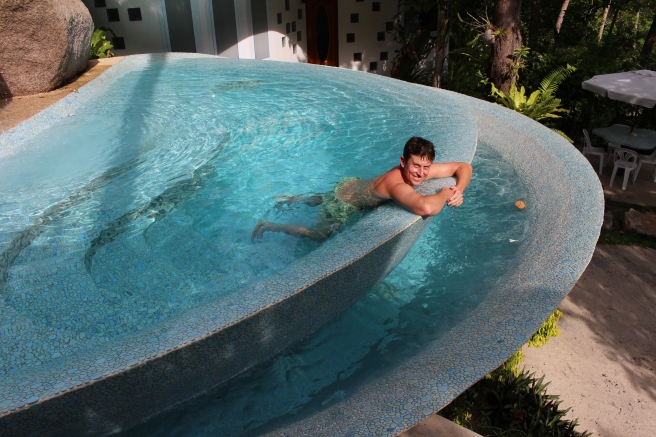 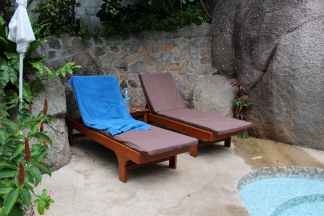 We read, swam, napped and explored our surroundings, finding an awesome treehouse and more great viewpoints! 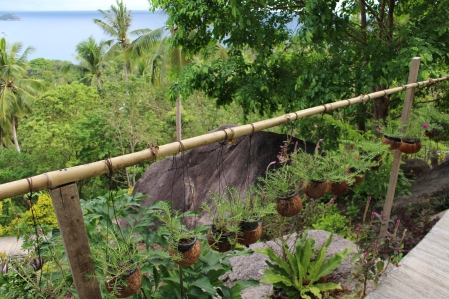 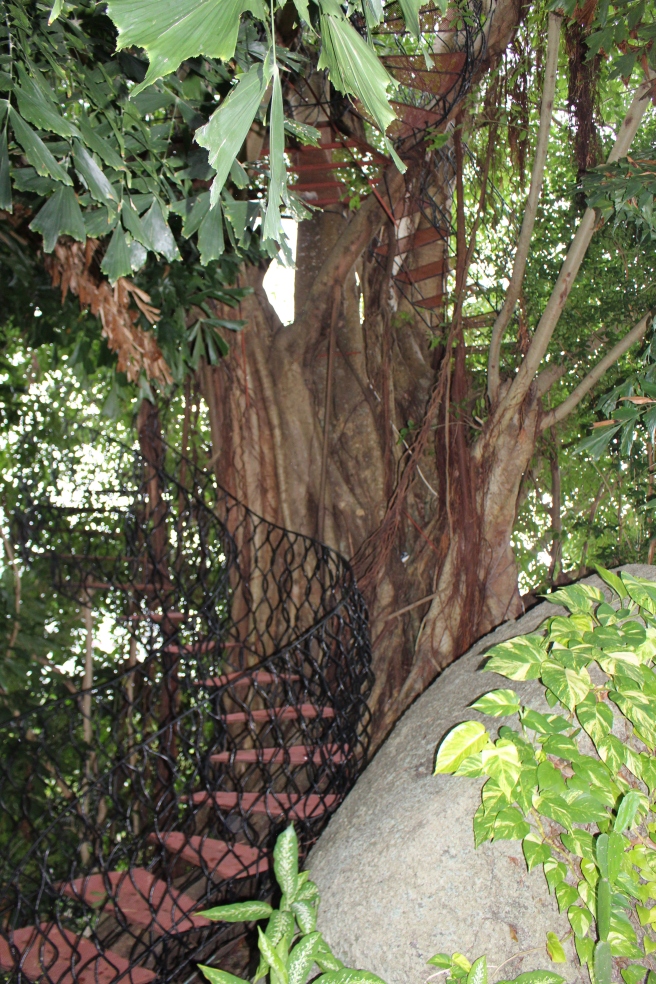 It started to rain in the late afternoon so we called it a day and made plans to go into town that night for dinner. Robert came down with a case of Thai tummy (which we think was the result of the previous nights take out order) so he decided to stay behind. Haley and I checked out the night life as we searched out a restaurant.

We passed plenty of shops, beach bars and even a few cabaret shows featuring some very pretty lady-boys.

We finally landed at a beachside barbeque restaurant (barbeque here means grilled fish, not pork) and watched a fire show while we dined.

This bold pup begged food off of our table which I happily shared until the staff supplied him with his own bucket full of scraps.

A fitting end to a great stay in Koh Tao! Come morning we were catching a high speed catamaran back to Koh Samui!