Our trip to Canada started off with a bang. Or perhaps a better word is ‘bust’. I woke up at 3:30 AM to an email alert from United that my 6:30 flight had been canceled and I needed to call to reschedule. My original flight was supposed to take me from Savannah to Chicago where I would meet Michelle, then Chicago to Calgary where we would arrive in time for lunch. The problem was the weather in Chicago, so the only option they could offer me was an even earlier flight (6:00 AM) to Newark, Newark to Houston (wrong direction!!) and finally Houston to Calgary where I would now be arriving around 5 PM. Poor Michelle got an even crazier re-route through San Francisco and didn’t get in til nearly 8! So much for exploring Banff on our way to Golden that first day. Disappointing but luckily we had built a free day into our itinerary just in case, and after all, we did both make it to Canada, with our bags! No small feat after all that rescheduled nonsense.

We stopped for a late dinner at the Cactus Club Cafe. Our waitress raved about the Prawn Ravioli which she said was the winning dish in a Canadian version of Iron Chef. We ordered the appetizer version and it was definitely delicious as was the rest of the meal.

Post dinner we stopped at Wal-Mart to pick up a few groceries and then hit the road for Golden, arriving just after 2 AM and immediately going to bed after 24 hours of travel.

We woke up the next morning to discover that our Air BnB was really adorable and incredibly well appointed. The owners had left us toiletries, coffee, candy, a bowl full of fruit and even a dozen eggs! So yes, the stereotypes are clearly true, Canadians are really nice.

After breakfast we packed our lunch and headed for Yoho, our first park of the trip. As we drove we got our first daylight glimpses of Golden, a cute and fairly quiet little ski town surrounded by huge snow capped mountains.

Here, I feel it’s appropriate to take a minute and get this out of the way, as I’m sure to be repeating it 8 million times throughout these posts: CANADA IS BEAUTIFUL! Like breathtakingly, mind blowingly beautiful in a way that only mountains and wilderness can be. If you want to see a piece of the world that still looks exactly as I believe God must have intended it, go to the Canadian Rockies. You won’t be disappointed.

Ok, so back to Yoho. Our first stop was a short walk to the Natural Bridge.

The Natural Bridge is a natural span of rock over the Kicking Horse River that houses a small waterfall. 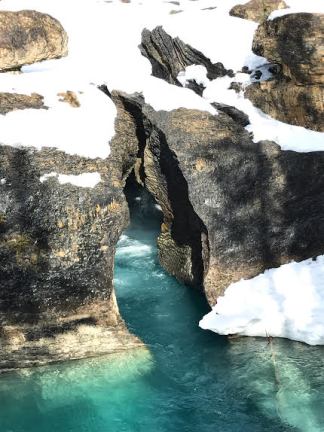 The water, like most of the water we saw throughout the parks, was the most beautiful shade of green/blue due to mineral deposits that run off from the glaciers.

Our next stop was Emerald Lake, which just so happened to still be frozen solid.

After Emerald Lake we headed into Banff, a second National Park which is very close to Yoho, to check out Lake Louise. On our way out of Yoho we ran into these guys: 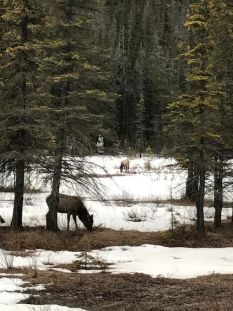 Elk! So cute! And hopefully not dangerous!

The daylight was fading and the temperature was dropping as we took a brief hike through the woods to Lake Louise. 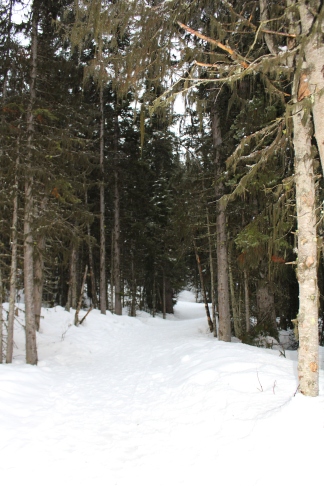 It too was beautiful, and frozen solid, although parts were beginning to thaw.

After lots of photos and walking on, over and around the lake it began to get dark and snow heavily and we decided to call it a day. 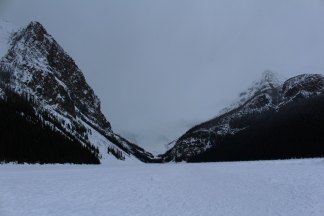 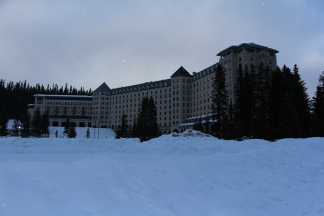 We headed back to Golden and enjoyed dinner at the Wolf’s Den where the poutine was mediocre but the elk burgers were to die for.

Kootenay in the morning!