The overnight train from Hangzhou may have been the end of my modeling career, but it was only the beginning of our adventures in Beijing. As Anna and I made our way to our newest hostel, I noted that Beijing was very different than hip, flashy Shanghai. The city was older, historic and slower paced, although still plenty crowded. Our hostel, the Peking Downtown Backpackers Accommodation, was on a hutong in a fantastic location.

A hutong is a narrow street or alleyway lined on both sides by traditional residences. These were the neighborhoods of olden days, although now most hutongs have either been demolished, or the old homes have been turned into shops/restaurants and hostels, as was the case with ours. 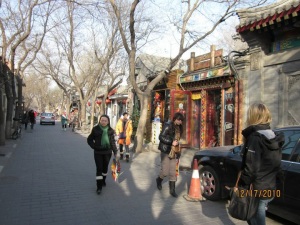 Our hostel was on a street filled with cute boutiques, a variety of restaurants and was within walking distance of the subway and a bus stop. We got a double room with a private bathroom, only slightly more expensive and a definite step up from our room in Shanghai. The room was clean, the staff were friendly and helpful and breakfast was included at the cute little restaurant next door. Having not been overly impressed with Chinese food up to this point, I was glad to see some more familiar options on the menu, even if they were a little strange for breakfast, and ended up ordering a tuna sandwich every day. I recall it being delicious, don’t judge.

Since we had slept on the train, we showered quickly and then hit the streets for a full first day of touring. Our first stop was the Lama Temple, a beautiful 17th century Buddhist temple and monastery. It was a lovely, spiritual place, and very peaceful despite all the tourists and thick clouds of burning incense. 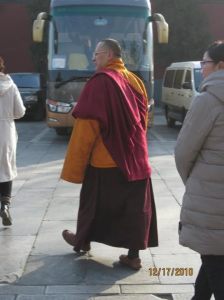 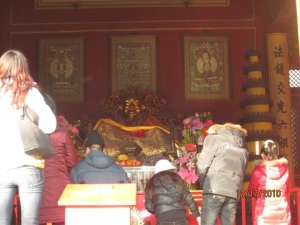 The temple is still active today and we encountered many monks studying, praying and prohibiting pictures of the 85 foot tall Buddha carved from a single piece of white sandalwood. That is awesome to behold and definitely the main attraction at the temple.  Of all the temples in Beijing the Lama Temple is one of the most popular and definitely worth a stop! 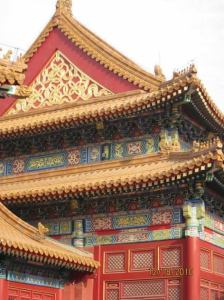 We followed the Lama Temple up with a trip to Beijing’s main tourist attraction, the Forbidden City. The Forbidden City was the Chinese Imperial Palace throughout the Ming and Qing dynasties. 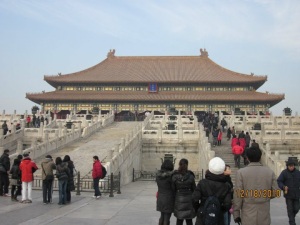 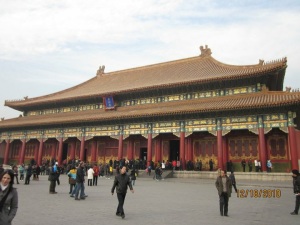 I loved these adorable tour groups waiting outside the main entrance. They all wore matching hats, I guess so that if anyone got lost, they would be able to find their group again? Ingenious and hilarious.

END_OF_DOCUMENT_TOKEN_TO_BE_REPLACED

I shared a few weeks back that Robert and I are deep in the throes of planning our trip to California in December. I finally took the plunge and booked our last hotel in San Francisco and my parents are treating us to our rental car as a Christmas gift. Thanks mom and dad!

Since I have previously confessed to my “Type A” trip planning, it should come as no surprise to anyone that my 4 page, color coded itinerary is near completion. Although I love to plan and create these itineraries, they really serve as more of a rough outline to make sure we don’t miss anything we really want to see. One of the best parts of exploring a new place, especially on foot (which is really the ONLY way, in my opinion) is detouring from your itinerary to meander down unexpectedly beautiful streets, wander through unique shops and stumble into delicious restaurants. It’s important to plan so that you aren’t running in circles or from one side of the city to the next and back again repeatedly, but it’s also essential to leave time to amble. I’m excited to experience what California has to offer, both on my list and off it!

Anyway, all that planning has had me fondly looking back on some of my favorite trips of years past. So I’ve decided to preserve those memories somewhere other than just Facebook albums…with blog posts! This will be the first of a series of travel posts about trips I’ve already taken. It will probably take me a while so they may be interspersed with current trips (California…yay!), recipes and of course other randomness. I hope you’ll enjoy reading them as much as I’m sure to enjoy reminiscing while writing them! 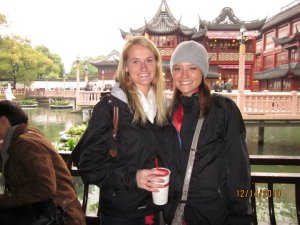 While I was busy learning about phonemes and language acquisition in my first year of graduate school, my best friend Anna was living in China, teaching English for a year. Anna is not only hilarious, fun to be around and beautiful (because that isn’t enough, right?), she’s also really smart. Like keeps up with current events other than just on yahoo, actually understands politics and speaks Mandarin Chinese smart. I know what you’re thinking, it’d be easy to hate her, but she’s just so darn lovable. So I decided to take a break from learning how to elicit R’s and spend my Christmas vacation visiting her in China. Best. Decision. Ever. A trip almost always is though, right? 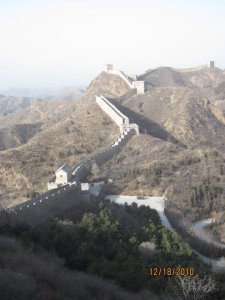 So after lots of e-mails and planning (mostly on her part), I renewed my passport, got a travel visa, packed what I thought were appropriate clothes for a trip half way around the world and hopped on a plane. 16 hours in coach and one unsuccessful sleeping pill later I arrived in Shanghai!