I know I know…this is why I can’t ever be a serious blogger. Serious bloggers start posting potato salad recipes during the last week of June to ensure that you have time to make their recipe before the actual holiday. Serious bloggers also post more than once every two months so there’s that too…

I guess I will be relegated to occasional, fun blogging for the time being. I’d like to think my lack of posting is because I am now spending all of my time being the World’s Best Mom like the t-shirt I felt certain I’d get for Mother’s Day would say. Instead that t-shirt never came and I am still stumbling through most days. I did get a t-shirt from my friend Justice that says “Doing My Best” which is actually a much more apt sentiment for my current life state.

On the 3rd of July my best looked like me making TWO desserts for the 4th as Robert watched WWF (WWE?) wrestling on the couch. If you are like me and are now thinking, wait a second…WWF wrestling is still a thing? The answer is yes, yes it is. Now before you start questioning my taste in men, I’ve never known Robert to watch pro wrestling before. I say I’ve never known him to because I’m pretty sure everyone went through a pro wrestling phase at some point, no? I recall it being sometime around late elementary/early middle school that pro wrestling was ‘cool’. I don’t think I ever actually watched any wrestling matches, but at that point I was still desperate to be cool like everyone else so I sure acted like I did and had a ‘favorite’ wrestler. I couldn’t just choose The Rock or Stone Cold Steve Austin like all the other girls though, I had to go for eccentricity. So I chose Ric Flair “The Nature Boy”, WOOO! That was his tagline, anyone remember that? Needless to say, desperate as I was, I was never really that cool.

So enough about my awkward middle school years, lets get back to those TWO desserts for the 4th of July. I really shouldn’t capitalize two because the first dessert was my Snicker Bar Salad which although delicious, isn’t really all that festive and is even perhaps better suited for Fall. Whoops.

My in-laws were hosting 4th of July dinner at their new house which has a spectacular fireworks view off of their dock. I hate baking, so when I got tasked with dessert I decided to make the Snicker Bar Salad because it is so easy (no baking required!). After I’d been to the store I found out that we were expecting 20 guests and I would need to double my recipe. So back to the store I planned to go. But before I could make it there I was inspired by this post on my sweet friend Kim’s beautiful new blog! I mean it is seriously pretty and puts this poor old thing to shame 😦 Also she posts more than once every two months so I highly encourage you to follow her!

So my plan was to make my (not so festive) snicker bar salad AND the ‘no bake cake batter fudge’ recipe using red, white and blue sprinkles (extra festive!). Not only was this another ‘no bake’ recipe, but it would also be the perfect way to use up the half box of cake batter I still had leftover from making Chrissy Teigen’s Yellow Cake Baked Oatmeal. The oatmeal was sadly not as delicious as I hoped and I never made it again, hence the leftover half box of cake mix. So I packed Amelia up and headed to Target to buy new pajamas, sunscreen and red, white and blue sprinkles. 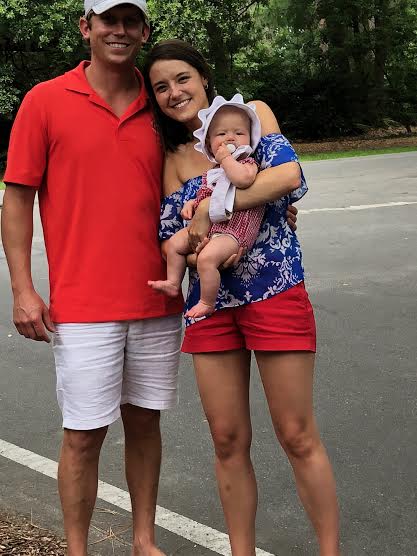 Sadly, Target had no 4th of July sprinkles…even in the dollar section. The only thing I hate more than baking is going to more than one grocery store in the same day so I decided rainbow sprinkles would do and I would be 0 for 2 when it came to festive desserts.

Thank goodness my mother in law gave me some festive bowls to disguise my not so festive desserts in! I also have a pretty darn cute and festive baby (and dog!) so at least the day wasn’t a total loss. 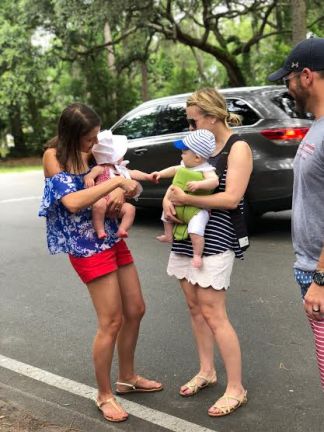 Also the fudge was good! Rich but definitely tasty! Not to mention super easy and endlessly customizable, that is of course, if you can find festive sprinkles 🙂

1/3 cup Sprinkles plus more for topping

One thought on “Anytime Fudge!”