Our second full day in Bermuda started with breakfast at our hotel followed by a ferry into town. Our hotel provided a complimentary ferry across the bay into Hamilton which was very convenient. 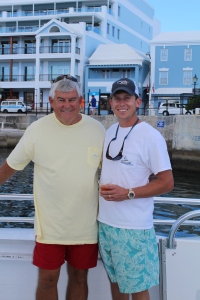 Once we made it into town we got our bearings and explored a few cute shops on the way to the Hog Penny Pub.

The Hog Penny held a special significance to my brother-in-law since it was where his parents first met many years ago. His father was in the military and his mother was on vacation. They met at the pub, fell in love and have refused to return to Bermuda since for fear that it wouldn’t live up to their wonderful memories. So romantic! 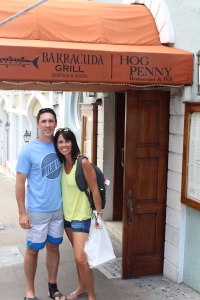 Of course we all wanted to check it out after that story so we decided to stop in for lunch. 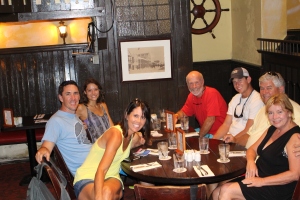 I decided to try the Bermuda Fish Chowder. The chowder is considered the national dish of Bermuda so of course every restaurant on the island puts their own unique spin on it.  It’s a tomato based stew with large chunks of fish and veggies, typically seasoned with black rum and hot pepper sauce.

It was delicious and my aunt who had tried the dish at lunch the previous day claimed that the Hog Penny version was much better. 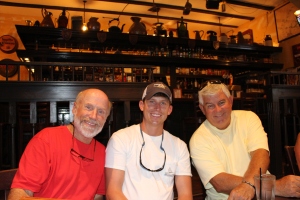 After lunch we headed to the harbor to meet the captain of the pontoon boat we had chartered for the afternoon. 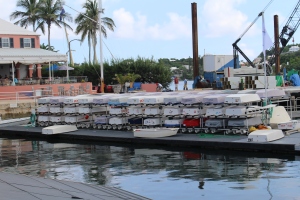 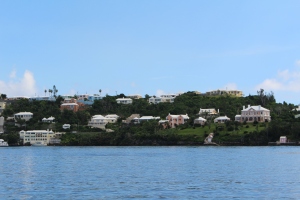 Since today was my aunt Vanessa’s birthday it was her turn to choose the activity and she was anxious to get on a boat and explore Bermuda by sea. We had chartered a pontoon boat through Aquatic Bermuda and Captain Tony was set to take us sightseeing for a few hours and then drop us at a coral reef to snorkel.

Tony definitely looked like a boat captain and he knew A TON about Bermuda. He had historical and personal stories about nearly every location we saw and was never stumped by any of our questions. I especially loved all of the beautiful, historic homes, of which we saw plenty.

I also found it interesting that none of the homes had docks and instead everyone anchored their boats out in the water.

Tony explained that this was safer in bad weather as the boats had room to get shifted around without bumping into one another or up against the dock. It also left a lot more water area since their weren’t docks sticking out and taking up space. The weather was absolutely perfect and we all enjoyed cruising around the island. 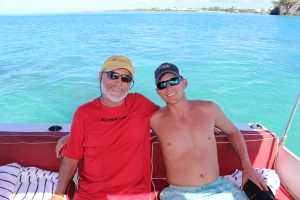 Tony took us to an old ship wreck that had formed into a reef and was swarming with fish. We threw some old hot dog buns into the water and the school got larger by the second! 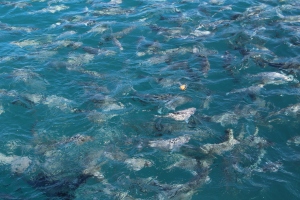 I couldn’t help but think the old ship looked like the nose of a giant sea monster coming up for air. 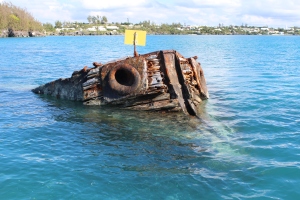 We ended up in a small bay that was perfect for snorkeling and enjoying a few dark and stormy’s. 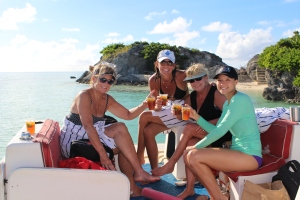 Once we made it back to the hotel and bid Tony adieu, we got ready for dinner. Vanessa had requested lobster for her birthday since they were in season at the time.

Once again we took the ferry into Hamilton and enjoyed dinner at the Barracuda Grill.

I decided to join Vanessa and got half a lobster…yum!

Very tasty but crab legs are still number one in my seafood loving heart. We returned to the hotel stuffed and ready for bed so we could explore the beaches on our last full day!

One thought on “Birthday(s) in Bermuda – Part 2”