We left Rome by train bright and early and decided to stop in Pompeii before making our way to our final stop, the Amalfi Coast.

The Naples train station, where we made the change over for Pompeii, was slightly seedy, with children roaming the aisles asking for money, and the first and only place I felt like I needed to keep a close eye on my bag.

We were met by fruit stands when we got off the train at Pompeii (Pro Tip: Buy bottled water..Pompeii is HOT and there isn’t much shade), and more or less arrived right at the foot of the ruins.

Although guided tours were available we opted to go the self-guided audio route so that we could explore at our own pace (and save a few bucks).

In case you need a refresher, Pompeii was a thriving, ancient metropolis that was completely wiped out with Mount Vesuvius erupted back in AD 79. The only survivors were fishermen who were at sea that day or people who were traveling at the time. The ruins were impressive and the mountain made for a beautiful and foreboding back drop. 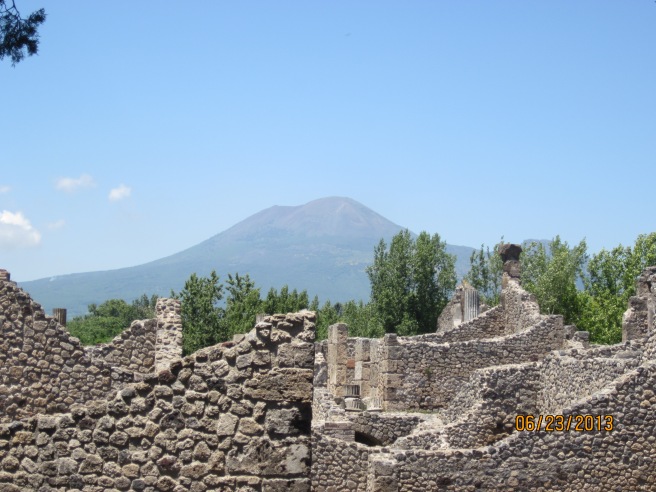 I had already been duly impressed by the seeming impossibility of the ancient architecture in Rome, and I was equally as amazed by Pompeii. I find it astounding that they were able to build and create the things they did with none of the technology or tools available to us today.

The forum or city center was the least preserved part of the city, and resembled many of the ruins in Rome. 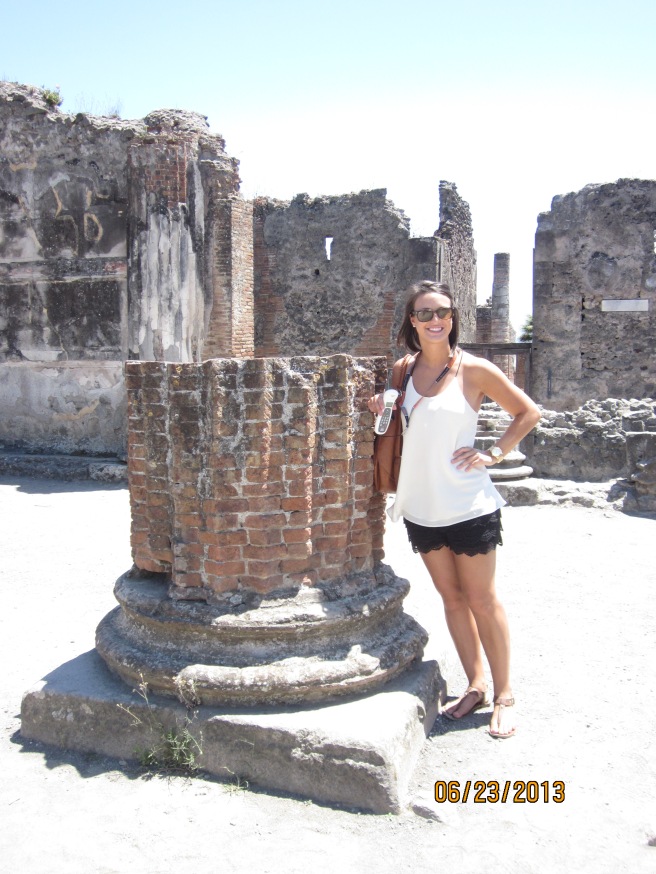 Some of the individual homes and other public areas like the bathhouse (and brothel) were much better preserved and much more interesting. 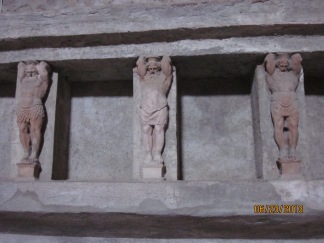 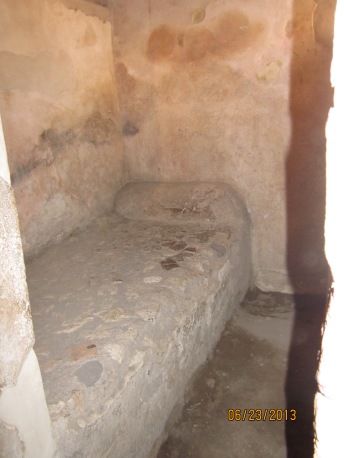 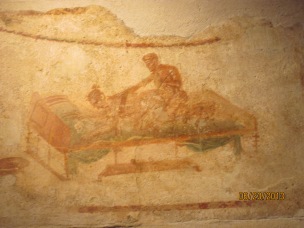 An uncomfortable looking stone bed and a visual “menu” of some of the services available in the brothel. 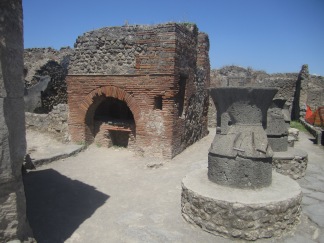 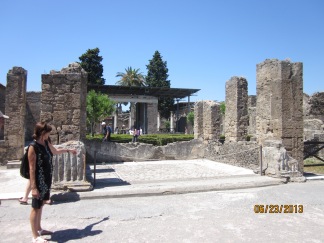 Many of the statues, paintings and colorful details were immaculately preserved as they lay under volcanic ash for 1500 years. I can only imagine how beautiful it all must have been in its day. 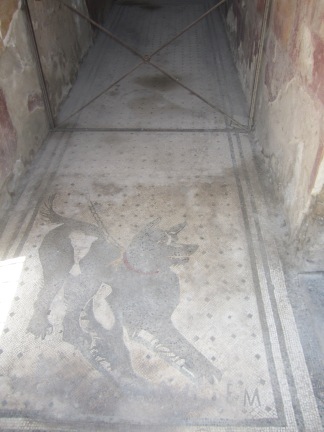 Although fascinating, the plaster casts of bodies were particularly eerie. While unearthing the site, archaeologists were able to pour plaster into the layers between the hardened volcanic ash, allowing them to make casts of the exact positions peoples bodies were in when they died. 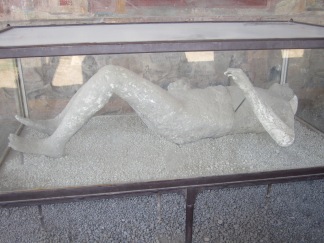 The thought of an entire city being completely decimated in a matter of minutes is a potent reminder of the power of mother nature.

We left Pompeii and hopped back on the train bound for Sorrento! The thought of some time on the coast was very welcome after our hot, dusty day in Pompeii. We boarded a bus in Sorrento and headed for our hotel in Amalfi. 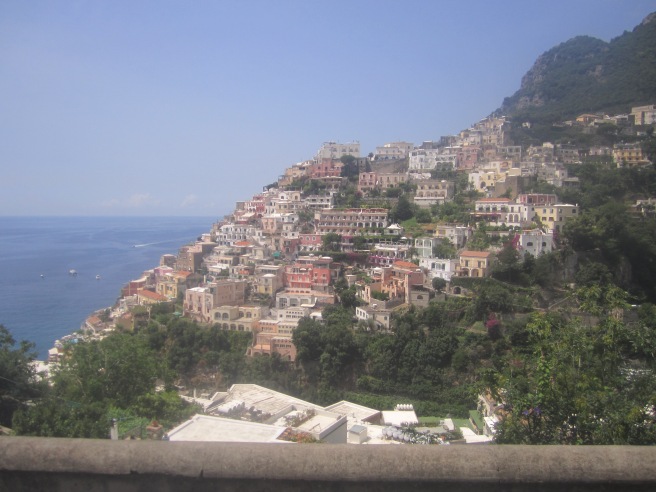 The bus ride provided gorgeous views of the coast, and stomach churning hairpin turns around the edge of the mountains. The curvy roads are narrow and RIGHT on the edge of the cliff and the railings don’t seem nearly sturdy enough. In short, bus rides in this region are NOT for the faint of heart.

The bus stopped right in the middle of the road and dropped us off directly in front of our hotel, can’t complain about that door to door service! 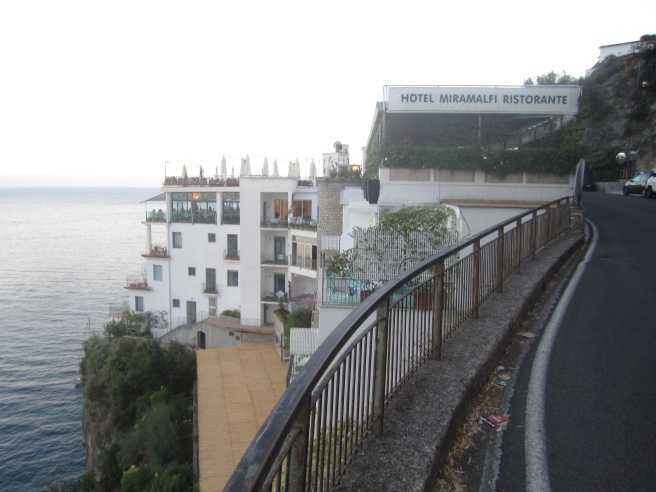 The Miramalfi was lovely, built right into the edge of the cliff.

It was starting to get dark by the time we got checked in so Haley and I decided to drop our bags and head into town for dinner. Town was an easy 5-10 minute walk along the road from our hotel. This is of course the same narrow road that the bus rolled in on so be mindful of cars and mopeds!

We met a few very complimentary locals who offered us a ride into town. 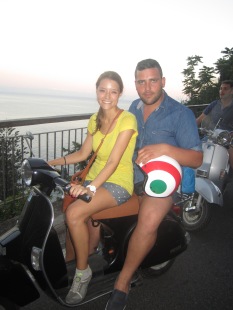 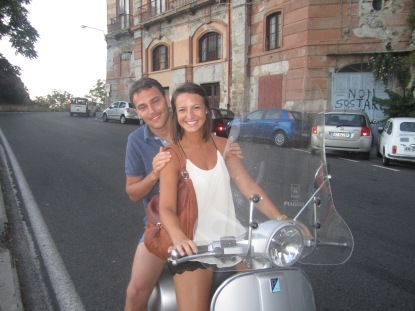 We politely declined but they insisted that we at least pose for a few photos. When in Rome (Er..Amalfi) 🙂 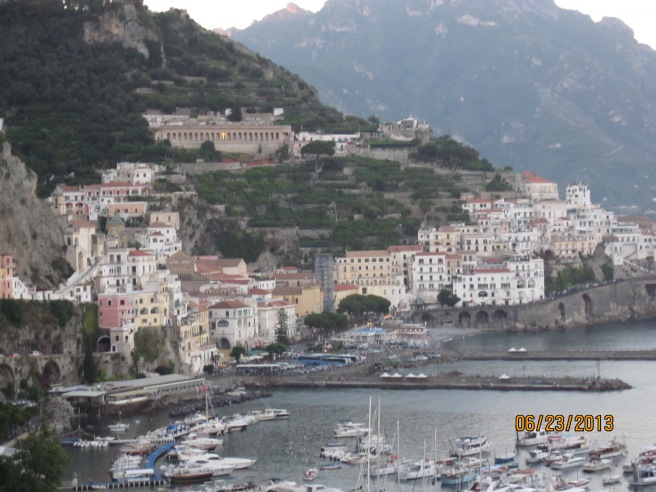 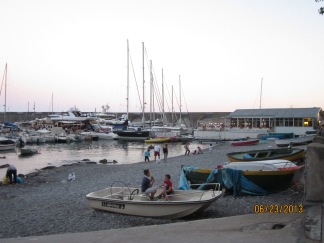 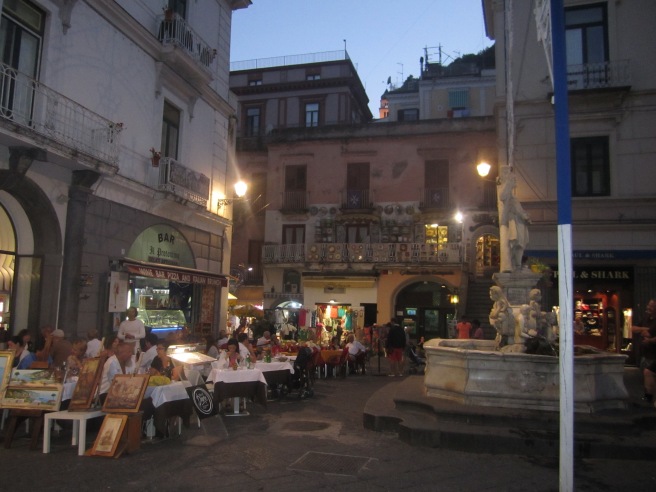 We enjoyed dinner and got a feel for the town before it got dark and we returned to our hotel for the night, ready to come back and see it all in daylight the following day!